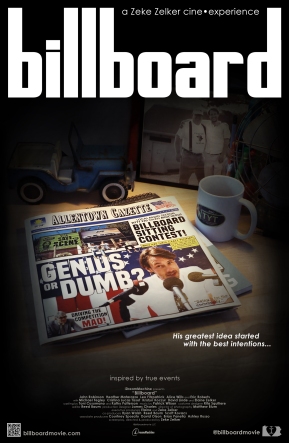 Zeke Zelker, one of Pennsylvania’s most promising filmmakers, is back at it with another inspiring story come to life. His new film, Billboard, will hit theaters this month. Zelker has shared that this movie is based loosely on true events which have inspired character development, plot points and the story’s themes/morals. Many parts of the film were produced in Philadelphia last winter.

Billboard is about a man named Casey who acquires the responsibility for a radio show, inherited from his father. He soon realizes that the show needs improvements and new features to create more interest from the public before the risk of shutting down. He offers the chance for people to enter a contest for how long they can live on a billboard catwalk to win grand prizes. When controversy and threatened reputation ensues, sacrifices must be made in order to save his hard work and get things back to what he intended -continuing his family’s legacy. Common themes of this story are the American dream, the struggle to succeed, and how the media affects us and creates a ripple effect.

Early in his life, Zelker had a sense of what truly inspired him. “I consider myself a storyteller at heart,” he says. “Things like art, furniture, architecture, art design, writing, photography, and of course cinema and all that it entails, always held my attention.” After many years of soul searching and studying different skills, Zelker landed in a career right where he belongs.

Zeke Zelker is a proud Allentown PA native with a rich background in the amusement park business. Zelker’s  great-great-grandfather founded the famous Dorney Park in Allentown in the year 1894. “Growing up,” says Zelker, “I developed an incredible sense of pride for my family history,” For this reason, he is glad to have been exposed to all that goes into what makes Dorney Park the popular and fun place that it is known to be today. He is thankful for the inspiration that his childhood has given him, as it has inspired him to be the entertainer that he’s become.

Zelker is a professional filmmaker today. He studied economics and finance at colleges in New York and Maryland, but decided to return home and continue his work in the Lehigh Valley. Future projects include several plays and a movie about a ballerina and a lawyer in an unlikely love story. As always, Zelker works with many film festivals including the popular Sundance Film Festival.

For those who desire to be part of the filmmaking project, Zelker is open to hiring interns who equally share a love for cinema. Many of Zelker’s past interns are Temple University, Drexel University and University of Pennsylvania students. Zelker enjoys sharing his talents with young people who like to practice their skills in graphic design as well. For serious inquiries, please send your resume and cover letter explaining your experience and interest to info@idreammachine.com.

Billboard is screening at local Movie Tavern locations starting this Friday, April 5th. Lehigh Valley residents can see it at Steel Stacks from April 5th to the 11th.