photos by of Carol Rosegg

This weekend, Rodgers + Hammerstein’s Cinderella comes to the Kimmel Center’s Academy of Music. This version is unlike any you may have seen before, but still maintains all of the classic elements you know and love. With a new book by Douglas Carter Beane (who was raised in nearby Wyomissing), the musical creates a new experience for anyone who believes in fairy tales. Lead actress Kaitlyn Mayse talks about the show’s “Ella” and how she brings a modern version of the character to life. 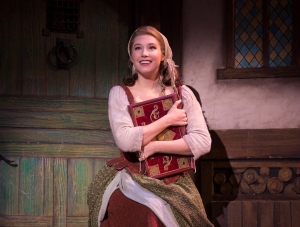 Q: You’ve been part of this show for a while, as ensemble and as an understudy. How did it feel to find out you would be taking on the lead role for this tour?
A: This show is so close to my heart, no matter what role I am playing. When I heard I would be playing Ella, I was shocked and thrilled and terrified and humbled. I sometimes still can’t grasp that it’s actually real!

Q: What experiences did you draw upon and/or how did you prep to create your version of Ella?
A: I obviously watched the many versions of Cinderella out there so that I could be familiar with the history of her story, but then I put that all aside and went straight to the text. The new book by Douglas Carter Beane has a lot to dig into and I wanted to create an Ella that was fiercely mine and maybe a little different than what people have come to expect.

Q: Cinderella is such a well-known story with so many adaptations over the years. What makes this one so unique?
A: This version of Cinderella’s story is so special because she really takes on her own destiny. She has goals and dreams for not only herself, but for her kingdom. And of course she needs her fairy godmother to give her the final boost of confidence, but then it’s all her.

Q: Why will fans of this classic story want to come out and see the show?
A: All of the classic elements are still there: the pumpkin turned carriage, the gorgeous gowns, an opulent ball. On top of that, the sprawling Rodgers and Hammerstein score is a delight and brings an element of nostalgia for anyone who knows and loves their original Cinderella. The new book and plot twists are fun and exciting, but won’t change what you love about Cinderella’s story.

Q: What’s your favorite song from the show?
A: My favorite song in the show is “A Lovely Night.” It is a beautiful quartet with four women. Four! That never happens in musical theatre. And the three women I get to sing it with (Sarah Smith, Joanna Johnson, and Natalie Girard) are just fabulous!

One thought on “Shaking Up a Classic Tale: Cinderella’s Kaitlyn Mayse Talks About the New Musical Coming to Philadelphia”