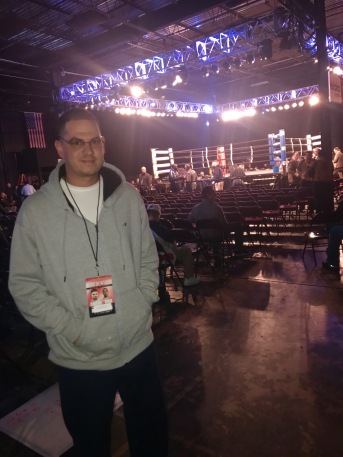 The 2300 Arena in South Philadelphia was buzzing with energy and excitement on Friday night, as it showcased many of Philly’s rising stars in the sport of boxing. Raging Babe Promotions dubbed the event, “The Philly Special.” Seven fights filled the card for fans to enjoy, including South Philly’s own Sonny Conto in his Pro debut. But, it was the main event featuring young, Italian phenomenon, Christian Carto, that the fans came to see.

Christian, 22, entered the fight, compiling an unblemished record in his first 17 fights, along with 11 knockouts in the bantamweight division. His opponent, Victor Ruiz, 28, from Tijuana, Mexico, came in with a resume of 22-10-1 in 33 professional bouts, in which 15 of those wins came by knockout. All signs pointed to this fight being a bantamweight slugfest for eight rounds. This would be Carto’s first fight against a Southpaw.

As the fighters were announced, it was clear that South Philly was in the house representing its own. Round 1 was exciting, as both fighters felt each other out. Ruiz threw a flurry of punches that Carto dodged and reacted with lightning speed of his own. The fight looked promising, as advertised.

Round 2 started just where round 1 left off. Both fighters exchanged jabs and danced around for position. The blow of the night came at the 1 minute 56 second mark, when Victor Ruiz delivered a devastating left blow to Christian Carto’s face. The punch knocked Carto out for the night, giving him his first professional defeat of his young career. The sold-out crowd was in awe, as Christian laid motionless. It appeared that he’d hit his head on the way down. After receiving medical treatment in the ring, he was taken to Thomas Jefferson University as a precaution, where he was later released.

Carto, who’s now 17-1, still has a very bright future in the sport of professional boxing, with a whole city backing him. I’m sure after taking some time off from this defeat, he’ll be back in the gym training for his next bout. One loss will not define someone who’s as determined to be a champion. If I’d have to bet money on it, his next fight will be sold-out once again.