When RowHome Magazine received an invite to attend the Philadelphia POPS perform the music of Elton John with Michael Cavanaugh and his band, I chose to come on Sunday afternoon- the last performance. Now that I’ve experienced the show, I regret not picking the first day so that I could come home to the RowHome blog and encourage all of our readers to purchase tickets for the remaining two shows. Lesson learned. Sorry dear readers, you missed something pretty damn awesome.

Touring vocalist and pianist, Michael Cavanaugh, along with his band returned to Philly this weekend after last year’s sold-out Music of Billy Joel shows with the POPS orchestra in 2016. Cavanaugh earned Grammy and Tony nominations as the lead in Broadway’s Movin’ Out, a jukebox musical featuring Joel’s music.

The orchestra, Cavanaugh, and conductor Stuart Chafetz completely charmed the audience yesterday with songs not only from Elton John, but also from Paul McCartney, Pete Townshend, and Billy Joel. Cavanaugh even turned things over to Chafetz and company for a medley of Chicago songs, and a fun compilation of pop rock riffs which Chafetz happily calls “riff-er madness”. Cavanaugh jumped back in toward the end of the riffs to sing along to “Sweet Home Alabama”.

My personal favorite Elton song is “Tiny Dancer”. Cavanaugh told the audience that “Tiny Dancer” had a second wave of popularity about 16 years ago when Almost Famous was released; a movie about a band called Stillwater who embarks on a tour. Fun fact, Cavanaugh pointed out, his drummer is the drummer from that movie, John Fedevich.

Everyone on stage was energetic, having a lot of fun, and did I mention they were charming? If you live in Philadelphia and have yet to experience the POPS orchestra, please do so as soon as possible. Verizon Hall is an incredibly beautiful venue. I was in the orchestra just a handful of rows from the stage, but every single seat in the hall would have been perfect. There’s even an option to sit above/behind the stage and look down at the performances. No bad seats and plenty of upcoming performances to pick from- next up is A Philly POPS Christmas from December 1-19th. The first performance is exclusively invite-only and fills the audience with military, police and fire departments, and other first responders, along with their family members, to recognize their ongoing service.

Bonus points: the lollipops you could grab on the way out for the journey home. 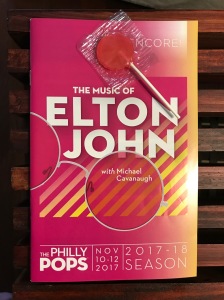