This past Friday, March 24th, I attended a convention that you might say had a little bit of a bite.

Here’s a hint: in addition to your typical access tiers such as “regular admission”, “VIP”, “Vendor”, etc., the event also featured a “designated driver” pass.  That’s because the American Whiskey Convention was exactly what it sounds like: a gathering of purveyors and aficionados from across the country to celebrate, discuss, and sample America’s most prized, barrel-aged spirit. 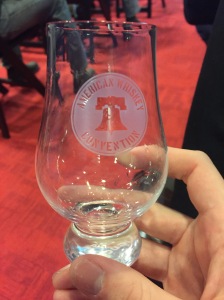 The event took place at The Philly’s very own Citizen’s Bank Park.  Each attendee received a free commemorative glass to sample whiskeys and keep a super cool memento to take home.

The spectrum of distillers in attendance was mind-boggling: from internationally-renounced giants like Jim Beam and Maker’s Mark, to local Pennsylvania distilleries just getting into the groove.  All told, there were around 40 distilleries in attendance—and while the event certainly involved sampling whiskeys, the fun didn’t stop there.  There were discussion forums covering a range of subjects, and a wide variety of vendors showcasing everything from specialty barfoods to artisan handicrafts made out of old whiskey barrels.

Let’s rundown a few of the highlights:

I started my evening off by joining a discussion forum titled  “The Science of Maturation”  led by Moonshine University’s resident chemist and fermentation expert Tyler Gomez-Basauri.  He went through fundamental components of the whiskey distillation process—from the char-level of the oak barrel, to the temperature of the facility in which the barrels are stored—and how each of those factors can draw out unique flavors and dramatically change the profile of the finished product.  As part of his demonstration, we sampled a variety of whiskeys that modeled those various factors—from a new distillate that tasted like corn-flavored mouthwash—to a 6-year fine bourbon with a complex and refined bouquet.  Despite undergoing a near-identical distillation, each whiskey exhibited a variety of unique flavors and aromas.

While Kentucky bourbon might be America’s flagship whiskey variant, Pennsylvania is experiencing a huge resurgence in craft spirits, many of which are distilled right here in Philadelphia.  Local distilleries in attendance included The Liberty Distillery, Red Brick Distillery, and W.P. Palmer Distilling Company.

I had the chance to meet Erik Wolfe of Lancaster County’s Stoll & Wolfe Distillery.  Although a Lancaster County native, he build his early career as a food marketer in New York City’s ultra competitive restaurant scene.  It was here that he me his wife Avianna, who is also an established restaurateur.  Together they transplanted back to Erik’s hometown to collaborate Dick Stoll, the renowned former master distiller at Pennsylvania’s historic Michter’s distillery, which was at one time considered by many to be Pennsylvania’s oldest standing distillery prior to shutting its doors in the late 80s.  Together they are hoping to bring historic Pennsylvania whiskey back into the fold.

Bulleit is a hot commodity right now—their two most popular product offerings—a bourbon and a rye whiskey—are both commonly used spirits at hip cocktail bars, and for good reason too.  Their whiskey is absolutely delicious, and it was good to see their brand out in force with the wagon literally filled to the brim with whiskey bottles.  Not a bad site at all.

Masey & Leigh had a selection of succulent syrups which were aged in—you guessed it—charred oak barrels.  The syrups ranged in flavor from classic maple, to more savory varieties such as Bourbon Jalapeno, which had an added kick that would perfectly compliment stack of pancakes or a batch of fried chicken wings.

Digitally-inclined whiskey enthusiasts looking to up their Instagram game take note.  Nate Woodruff, owner/producer of popular Instagram channel Whiskey with A View, featured a rather unique—and I can only imagine, exorbitantly expensive—whiskey at his booth.  Labeled “Special Old Reserve”, the whiskey was distilled in 1917 and bottled in 1932.   The catch?  To sample the near-hundred-year-old whiskey you had to first win a drawing by purchasing one of Nate’s $20 branded t-shirt.  While I passed on entering the drawing myself, it’s certainly a captivating way to share your brand.

Even you’re relatively unfamiliar with whiskey and bourbon, surely you’ve heard of Wild Turkey.  I had the opportunity to sit in and sample a range of their offerings with legendary master James C. “Jimmy” Russel.  For many, this was the marquee event of the evening.  Jimmy Russel has been distilling bourbon in Lawrenceburg, Kentucky, for over 60 years, and is often referred to as the “Buddha of Bourbon”.  Picking his  brain as he guided us through a flight of  5 whiskeys was a gratifying and insightful experience.

Walking the convention floor and tasting whiskeys can make you a bit peckish—thankfully the convention provided a splendid selection of local favorites to refuel the tank.  The buffet included Philly standbys such as build-your-own cheesesteaks with a mouthwatering melted cheese sauce, as well as both sweet and spicy grilled Italian sausages.  Yum!