The human condition is “the characteristics, key events, and situations which compose the essentials of human existence, such as birth, growth, emotionality, aspiration, conflict, and mortality.” Though The Humans, now playing at the Walnut Street Theatre, is not called The Human Condition, it very well could be.

The play, written by Stephen Karam, is the winner of 20 “Best Play” awards including the Tony in 2016. The story follows the Blake family as they prepare for Thanksgiving; and everything that comes with the holiday – the fights, the craziness, and the love.

When we meet the Blakes, we can tell there is tension– specifically between Erik and Deirdre. The couple, played by Greg Wood and Mary Martello, are facing hard times; economically and personally. They travel from Scranton to visit their daughter Brigid (Alex Keiper) who just moved into a downtown, New York apartment with her older boyfriend, Richard (Ibrahim Miari). Also in attendance are Aimee (Jennie Eisenhower), Brigid’s older sister who has some health issues and a hard time recovering from a recent break up, and “Momo” (Sharon Alexander), Erik’s dementia ridden mother. 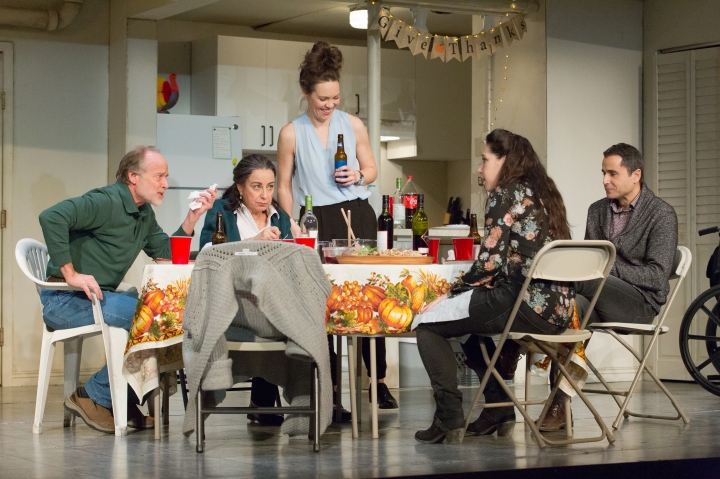 The personalities of each of these characters could be any mother, father, sister or grandparent. The Humans shows life near the end of the road, a career that can’t get off the ground, a father who wants to provide all he can for his family, and an over-bearing mother. These are all characteristics of life. Brigid, for example, aspires to be a composer, but no matter how hard she tries, she can’t catch a break. Her mother nags both her and her sister to go to church more and hates that she and Richard moved in together without being married.

To me, these scenarios of life seem all too familiar. With the holidays recently over, most audience members can probably even say “yep, that person was definitely at our house this season.” The show makes you reflect on your own family life, and the writing and direction is so true to everyday – speaking over each other at the dinner table and little digs that family members say to each other. At some points, you even forget you’re watching a play and that these actors rehearsed their lines. Everything was so natural and believable.

The show hits even closer to home for the Walnut Street Theatre as Aimee lives in Philadelphia (an Eagles nod received a roar of applause from the audience). The cast does a phenomenal job at highlighting the relationships of a family, making what you see on stage very real and heartfelt. The set itself is also a main character. Lights go out and heating vents turn on, the noises of city living drive Erik to breakdown with everything he has on his shoulders.

The Humans is a humorous and moving reflection of being human. It can be uncomfortable to see all these aspects from the outside looking in, but it makes one reflect on life and makes you realize that no one is perfect; just human.

One thought on “Join the Blake Family for Thanksgiving Dinner: The Humans at Walnut Street Theatre”