Happy Father’s Day, beautiful downtown world! A big shout out to all you dads out there, and to the moms who have filled the “dad” role too!

This is the 34th time I have celebrated Father’s Day! On March 26, 1983 when my Ashley was born, I became a father. Now…anyone can become a father, but it takes some work to be a dad! Of all the titles I have held in my life, the one that I have relished the most is being called “Dad”. And on October 17th 2012, I was bestowed with another great title- “Poppi” when our Ella Bay, my first granddaughter, was born.

I have been blessed with three beautiful daughters, two great son-in-laws and one son-in-law to be (yes, the sons come full grown and I couldn’t ask for better partners for my daughters or fathers to my grandbabies). As of now, I have two of the most gorgeous, adorable, smart little granddaughters ever…and counting. Around the end of July, I will have the honor and blessing to be a Poppi to another granddaughter. I’ll have six girls and I love it! Although if I come home and the toilet seat is up, I get real suspicious!

This is also the 30th Father’s Day that my own dad isn’t here to celebrate with. He would be so proud of his five granddaughters (my brother John has two daughters too) and his great-granddaughters. This October would have been his 100th birthday.

My dad had to quit school only making it to the tenth grade because he had to go work on a farm to help support his family. He came from a family of nine. My dad, being next to the youngest, was raised by my grandfather and his older siblings. My grandmother died in the 1919 flu epidemic in Philadelphia when Dad was just two. His only remembrance of his mother was him holding onto and kicking the ambulance driver that was taking his Mama away. His eldest sister Carmella, who everyone called “Nellie”, was his mother role model.

I can’t forget to mention that my great-grandmother, who passed when she was 108 years old, lived with them too. When Dad was out later than he should have been, his remembrance of Great-Grand mom walking through the streets of South Philly carrying a candle to light her way saying “Vene qui Luigi” (meaning “Come here Louie”).

Dad was your typical Depression era kid. Like some kids he would get into trouble at times, but he was always able to talk his way out of it and make people laugh. My Aunt Jennie would say that I’m just like my dad. I guess that’s where I get it from- the making people laugh thing and the art thing. Dad was great with his hands too. He could build anything and was a wonderful artist. My brother Johnny was blessed with Dad’s “Mechanical Prowess” and I with his artistic abilities.

One week before World War II began, Dad enlisted in the Army. He landed and arrived in Pearl Harbor on December 8th, 1941. He became a turret gunner on B-24s in the Army Air Force and flew 52 missions until the end of the war. He was the eldest in his squadron and first sergeant, who guys back then called “the Sarge”. At 26 years old, he was the oldest in his squad. These kids looked up to him and he earned the nick-name “Uncle Louie Pinto”.

During his time in the South Pacific he survived three crashes. One earn him a membership in a club that no one wants to be a member of: the Caterpillar Club. To become a member of the Caterpillar Club you have to jump out of a plane to save your life. There were 12 crewmen on that plane and only six survived, Dad parachuted into the South Pacific, was in a one-man life raft for eighteen hours surrounded by sharks (I remember him telling me that the shark repellent issued by the Army seemed to draw them instead of getting rid of them) and then was picked up by an American submarine that was under radio silence. My grandfather had received word that his son was a MIA and Dad spent almost eight weeks on board that sub. When I once asked him what he remembered about it the most he said that everyone was sea sick and he wasn’t. When the sub finally got into port he was able to get into contact with his father to let the family know that he was alive. Dad traded his Caterpillar Club card with one of his Army buddies who had also survived, so that they would never forget each other. They never did.

I found out much later that during his stint in the service he also saved lives. He saved a young Philippine boy from the Japanese. The Japanese had killed his parents and Dad rescued him and got him to a safe refuge. For the next 30 years he wrote and kept in touch with Dad, telling him he had become a train engineer and now had a family of his own. At the end of every letter, he would thank Dad for saving his life. Dad also learned to give a needle in battle. Tony Martino got hit with shrapnel from a grenade and was missing part of his head; Dad comforted him and gave him a shot of morphine. Tony survived and has a steel plate in his head.

My dad and mom are both gone now. We lost Dad in 1987 and Mom in 1992. I like to think that they’re up there watching over my brother and I. And our families. I speak to them sometimes. Here is what I would say today: 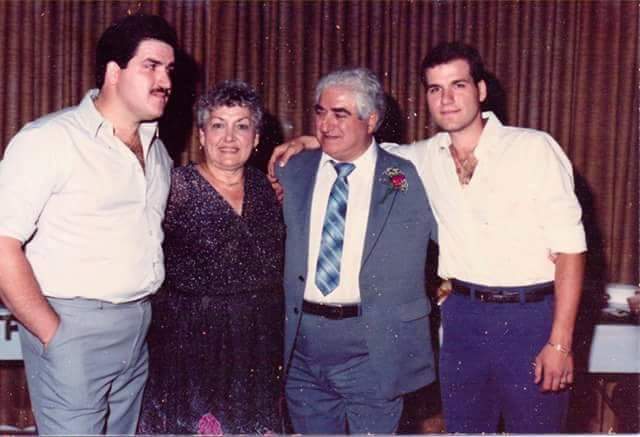 Mom and Dad, I miss you so very much. There is not a day that passes that you’re not in my thoughts and how thankful I am that I was lucky enough to have you as Parents. You have five beautiful granddaughters. I have three. Dad- you were alive and only met Ashley and Marisa, and Mom- you met all five including my Tara, Johnny’s Valerie and Tina Marie. The girls have grown up to be such great women. I only wish John and I have instilled in them what you have in us. I have always said that the best title I have ever had the honor of having was “Dad”.

I don’t know if I ever told you this, but when I was little and you used to think that the Lone Ranger and Superman were my heroes, they weren’t. You were. Dad, you once said to me that when times were tough success isn’t measured in money, but how people remembered you. You said Johnny and I were you and Mommy’s success. I never forgot that. Thank you for being the greatest mom and dad ever.

I Love you and you will always be my heroes!

To read more about my heroes, my parents, check out the winter 2016 issue of Philadelphia RowHome Magazine here.