…there’s just no tune as exciting as a show tune…

It’s fitting then that their 2016-2017 Independence Studio on 3 season concludes with Jerry’s Girls, a tribute to an all-American composer and lyricist, Jerry Herman. The “master of song” premiered his first Broadway musical, Milk and Honey, in 1961 and his credits also include Hello, Dolly!, Mame, and La Cage Aux Folles (which gave him the distinction of being the only composer/lyricist in history to have had three musicals that ran more than 1,500 consecutive performances on Broadway). Additional shows include Dear World, Mack & Mabel and The Grand Tour. Right now in NYC, you can catch the revivals of Hello, Dolly! (with Bette Midler) and Dear World (with Tyne Daly).

Jerry’s Girls began in 1981 at a nightclub in Manhattan where Jerry Herman himself was part of the show. The intimate setting at Independence Studio on 3 is perfect for this show- directed by Ellie Mooney- transporting the audience into what really does feel like a nightclub from decades ago. The pianist begins, with his vintage look and swanky lampshade to boot. The set, colored in purple and gold, highlights the royalty you’re about to witness.

Then, out pops the trio of women who perform the show- Barbara McCulloh (The Wizard of Oz, Peter Pan, The King and I, South Pacific), Rebecca Robbins (A Grand Night for Signing, Mary Poppins, A Tale of Two Cities, The Phantom of the Opera), and Adrienne S. Wells (The Other Place, A Christmas Story, Memphis, Spring Awakening). They sing every song, every bit of dialog. And in the first eight songs- taken from Herman’s Hello, Dolly!, Mame, Mack and Mable, and Parade– we are introduced to them and their personalities. 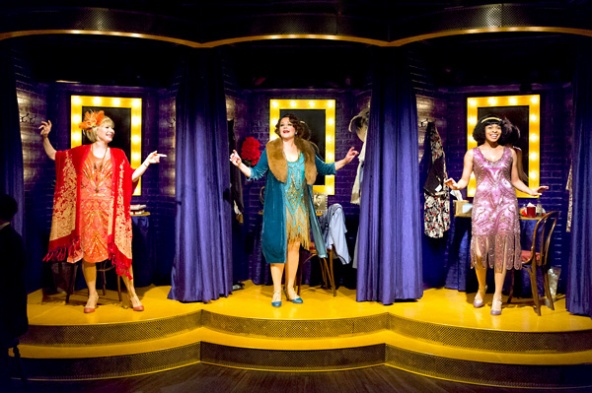 The set itself is quite beautiful (created by Roman Tatarowicz). The audience can keep a constant watch on McCulloh, Robbins, and Wells as they sit in their individual dressing rooms. We watch them change in and out of costume, put on their make-up and shoes, and share a beverage or two (an early highlight in Jerry’s Girls is “We Need a Little Christmas” from Mame). With help from the pianist and a stage hand (who are very important parts of this show), these three leading ladies take us on a non-stop trip of love, comedy, optimism, and strength through Herman’s songs.

The vaudeville portion of Jerry’s Girls shows off the individual talents of each woman- McCulloh’s “Take it All Off”, Wells’ “The Man in the Moon”, and Robbins’ “Before the Parade Passes By”. These highlights are topped off with Act I’s closing number, a comical performance of “Hello, Dolly!”.

Act II features a movies medley and three fantastic songs from La Cage Aux Folles (concluding with Robbins’ stand-out performance of “I Am What I Am”). The trio of women who perform every number, make costume changes right in front of the eyes of the audience, and have barely any time to catch their breaths between songs, show us what it takes to do what they do. Jerry’s Girls will really make you appreciate any musical performance you watch from now on. These ladies sing to us, they sing for us, they break the fourth wall and sing on us! It’s just fun. And we need to have fun. 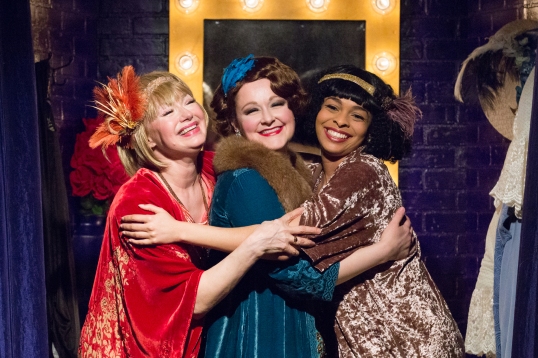 I’m really no good at reviewing musicals, because I love them all. That’s the truth. I left this show feeling great and wondering why I don’t take advantage of Philadelphia’s musical scene more. So, I’m not going to sit here and tell you why you should or shouldn’t see Jerry’s Girls. Instead, I’ll just encourage you to get out and see a show in Philly this spring. And if you do, it should probably be this one. It’s cliché to say- but this show really does have everything. Most importantly, the all-female cast reminds us that girl power is a strong, strong force and if you have a young lady in your life who loves the theatre or wants to pursuit a theatre career someday, take her to see this one. Whether your love the stage like I do, or just want to dip your feet in and see how it feels, Jerry’s Girls is the perfect night out for you.

Come spend a night reliving some of your favorite show tunes at home in Philadelphia. Jerry’s Girls continues through July 2nd in the Walnut’s Independence Studio on 3. Tickets can be purchased here.

To read our interview with Rebecca Robbins, keep an eye on our social media accounts and be the first to know when our spring issue is released. You’ll be able to view it digitally on our Issuu page, or you can have it delivered to your door if you subscribe before 4/9.