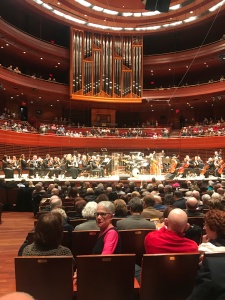 I arrived at the Kimmel Center and sat in my seat just before the lights began to dim. As the symbols start rattling off, the Philly Pops Orchestra began to play the Rocky theme song as the crowd clapped along. The maestro took the mic and explained it as his theme song: a perfect mood set for the gleeful and exciting night ahead of me. This is a celestial event.

This was a celebration in honor of Ella Fitzgerald (the First Lady of Song). Her 100th birthday would have been this upcoming April 25th. Along with Fitzgerald, the show celebrated her frequent collaborations with Louis Armstrong (one of the most influential figures in jazz). The orchestra began with the classic hit “Bill Bailey Won’t You Please Come Home”. At this point the conductor brought out our trumpet extraordinaire for the night, Byron Stripling, as the orchestra jumps into the next melody.

Let me tell you, I knew from this point on that Stripling was not going to disappoint. He may have hit one of the longest trumpet notes that I’ve ever heard in all my life. The crowd went wild. Then comes another surprise. He plays the intro to the next rhythm and blues song, puts down his trumpet, and belts out a tune. Yes, Stripling can sing too, and his voice is phenomenal. It’s one of those voices that make you want to throw on a fur coat and order a dirty martini. Deep, raspy and absolutely perfect for the setting of show. And what makes it even better, you can tell that he loves what he does: entertaining.

Stripling then introduced our “Ella” for the night, Ms. Marva Hicks. She gallivanted onto the stage wearing a striking blue gown, and she has the voice to match. Striking. Her amazing energy flowed through the entire theatre, touching all of us in the audience. The two have an undeniable chemistry, making the entire thing even more enjoyable. By the 6th or 7th song, they go for “It Don’t Mean A Thing If You Ain’t Got That Swing” and they nail it. My foot did not stopp tapping since they began.

Together Stripling, Hicks and the Philly Pops displayed so much fun and passion that I couldn’t believe I was witnessing so much talent in one room. The Duke himself would have been proud. A few songs after intermission ended, Stripling did a rendition of “What A Wonderful World” and my heart danced along with the lyrics he sang. It was one of my childhood favorites and he performed it so well that I couldn’t help but smile.

Hicks, now wearing a gorgeous red gown, absolutely killed the second half of the show with Stripling (just as they did the first). No disappointment, not at all. Finally, the show ended with “Sweet Georgia Brown”. They received a standing ovation, as well as an encore. We were all dying for more. Extremely powerful. Stripling finally left the stage after teaching the entire audience how to scat.

Marva Hicks and Byron Stripling paired together with the Pops was undeniably extraordinary. The humor, the chemistry, the music, and the talent was enough for me to mark this down as a fabulous evening filled with great music. The Philadelphia Pops is always a wonderful time. If you can go, go. You won’t regret it. For more information and tickets, visit the orchestra’s website.