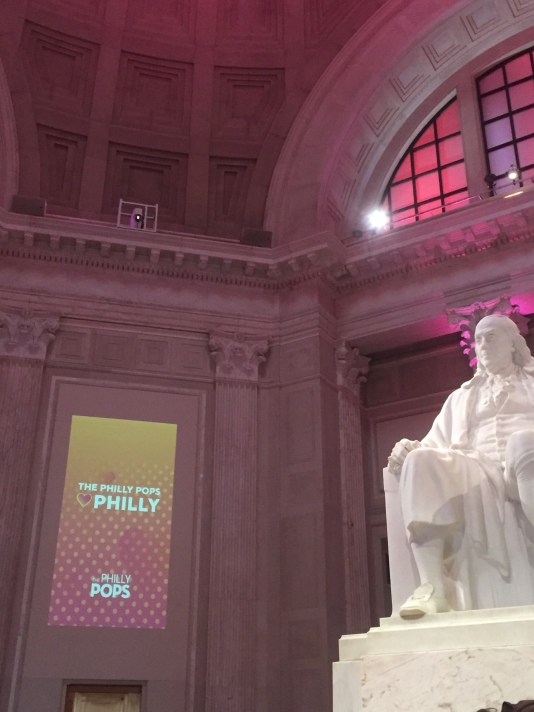 I walked into the Franklin Institute this morning where the Philly POPS announced the 2017-2018 season (subscriptions are on sale now) and was greeted by a couple Stormtroopers and Darth Vader himself. Is there a better way to spend Valentine’s Day Morning? I certainly can’t think of anything better.

As I made my way to an open seat in the rotunda, I was pleased to see my old friend Benjamin Franklin as the backdrop to today’s announcement event. Michael Andrew and the Philly POPS Big Band Combo crooned and swooned as the crowd gathered. Seriously, whatever my husband has planned for me tonight will pale in comparison. Could the day get any better? (Yes it could, there were Valentine’s themed snacks for everyone!)

The Franklin Institute holds about 50 weddings a year, by the way.

After a few words from some VIPs, the announcement began. The Philly POPS’ 39th season will see a SIXTH program, expanding for the first time, with a November series.

John Williams has won five Academy Awards, four Golden Globe Awards, seven British Academy Film Awards, and 22 Grammy Awards. What would E.T., Raiders of the Lost Ark, Jaws or Harry Potter be without his signature music? The Philly POPS season opens with a thrilling tribute devoted to Star Wars in its 40th anniversary year, along with Williams’ other iconic scores. The program features the Philly POPS Festival Chorus and, as an added bonus, a visit from the fabulous, costumed-members of Garrison Carida of the 501st Legion re-creating the Star Wars galaxy of characters!

The Music of Elton John with Michael Cavanaugh/November 10–12, 2017

Welcome back Michael Cavanaugh! After sold-out Music of Billy Joel shows with the POPS in 2016, Cavanaugh and his energetic band return to Verizon Hall to rock Elton John’s greatest hits, including “Rocket Man,” “Tiny Dancer,” “Your Song,” “Candle in the Wind,” “Crocodile Rock,” and of course, “Philadelphia Freedom”. An in-demand artist who tours the globe, Cavanaugh earned Grammy and Tony nominations as the lead in Broadway’s Movin’ Out. Celebrated conductor Stuart Chafetz leads this tribute to Elton John, complemented with music by his contemporaries: Paul McCartney, Pete Townshend, and more.

The POPS joins in a citywide tribute to Leonard Bernstein to mark 100 years after his birth. Bernstein revolutionized music forever by blurring the lines between classical and popular, most famously with his iconic hits West Side Story, Candide and On the Town. David Charles Abell, Bernstein’s protégé and a Philly favorite and native son, conducts the popular Bernstein repertoire in anticipation of the soon-to- premiere exhibition at the National Museum of American Jewish History. Guest Vocalist and Broadway star Lisa Vroman returns the POPS stage (after a successful run in 10 POPS Christmas shows in 2015) where she’ll be joined by fellow Broadway stars Alli Mauzey and Ryan Silverman.

Three of Broadway’s most celebrated stars join the Philly POPS and conductor Todd Ellison — hailed by The New York Times as one of “Broadway’s electric conductors” — to showcase the finest in show tunes. It’s the songs you can’t stop humming from Gypsy, Funny Girl, Chicago, Thoroughly Modern Millie, South Pacific, Cabaret, Beauty and the Beast, Wicked, Phantom of the Opera, and more. With two dozen Broadway shows under their collective belts, vocalists Debbie Gravitte, Susan Egan, and Christopher Seiber are the perfect trio to bring the best of Broadway to life on the POPS stage.

Music Director Michael Krajewski has created a splendid homage to Frank and his Rat Pack! Sinatra and Friends features Michael Andrew, back after his sold-out POPS Sinatra series in 2015, and Ashley Brown, Broadway’s darling fresh from star turns in Mary Poppins, Beauty and the Beast and The Sound of Music Live! Sinatra staples like “My Way” and “You Make Me Feel So Young” will pair with Dean Martin’s “Everybody Loves Somebody”, Sammy Davis Jr.’s “That Old Black Magic” and Liza Minelli’s shared Sinatra blockbuster “New York, New York”.

Get ready to belt out your favorite classic rock with the POPS! Sing along with Broadway’s Bryce Ryness and the Philly POPS Festival Chorus to the most memorable songs of the Rolling Stones, Led Zeppelin, Queen, and more. We’ll rock the hits that get you on your feet, including “Satisfaction”, “Stairway to Heaven” and “Bohemian Rhapsody” with chart-toppers from The Beatles, Journey, ELO, Peter Gabriel, Styx, and more. Ryness most recently delighted Philly POPS audiences in 2016’s Carole King Songbook and has starred in Matilda, Hair, and Legally Blonde on Broadway. 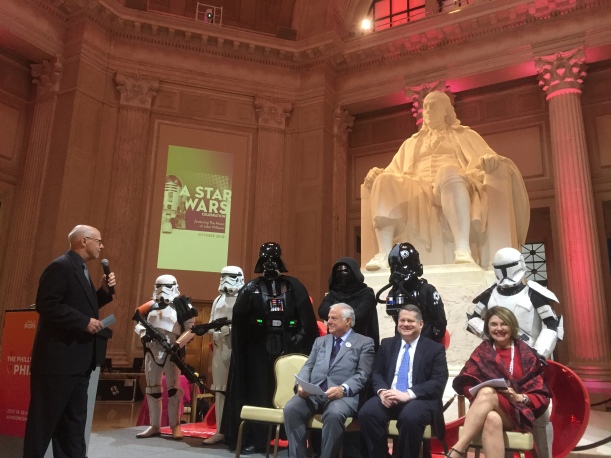 Whew! This is going to be a GREAT season. Not only are there some fantastic series planned, the POPS will continue to provide free concerts for the men and women who proudly serve this country. The Salute Series will include five shows this year (May 27th, July 3rd, July 4th, November 11th, and December 1st) at locations across Philadelphia.

For the third year in a row, POPS in Schools has partnered with the School District of Philadelphia to present the All-City Jazz Festival. The free event will be held in a new spot this year, so keep your eyes on the Pops for an announcement soon.

Additionally, a special one-night only event will take place on January 19th, 2018 featuring Rufus Wainwright. The vocalist, composer, and songwriter will grace the POPS stage with the 65-piece orchestra accompanying him through pop songs, classical, and more.

And honestly, this is not even all of it. For a complete list of everything POPS related, check out their website. Take a minute to learn about their commitment to music education in the city as well.